CNC
What is 2D, 3D and 5-axis Milling
2D milling (also called 2.5 D milling): 1. The tool axis is constant during an operation. 2. The tool moves into the material along the Z axis axis, then mills a plane in X-Y. 3. The tool motion is along 1 or 2 axes simultaneously.
Video source: http://www.iscar.com
With a right angle head, the infeed axis may be X or Y instead of Z, and the plane in the other two axes.
3D milling 1. The tool axis is constant during an operation, always Z. 2. The tool moves simultaneously in all 3 axes to mill 3D surfaces.
Video source: https://www.secotools.com
5-axis milling 1. The tool axis is NOT constant along Z, keeps changing. 2. The tool moves simultaneously in 3 linear axes and 2 rotary axes to mill surfaces.
Video source: http://www.sandvik.coromant.com
Machine monitoring system on Industry 4.0,CAD/CAM software,CNC Program Simulation,  CNC Training Software
Etc.
Close encounter with a Hoopoe
On Sunday mornings I usually walk in a park near my home, and my fellow-walkers are a few other humans. One particular Sunday my only other fellow walker was a Hoopoe that seemed to have found interesting breakfast on the pathway. It’s a beautiful looking bird, with lovely colouring and a great head dress. Its name is an onomotopic word (a word that is derived from the sound that it describes). The Hoopoe’s call sounds like “oop oop”, and its Latin name is in fact Upupa epops. 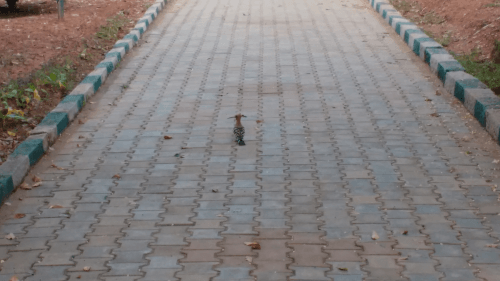 This particular bird seemed to trust humans, and allowed me to get quite close before flying away.
Here’s what a Hoopoe sounds like.
Video source: ESL and Popular Culture
A couple of interesting facts about the bird: While the female is sitting on the eggs to incubate them (and hence cannot go out to eat), the male feeds the female. The young ones defend themselves by squirting predators with their foul smelling faeces. They are left unattended in the nest (which is typically a hole in a rock face or a tree) when the mother goes out foraging for food, so they have to do this occasionally.
The Hoopoe happens to be the national bird of Israel.

About this blog on CNC machining

Insert selection based on insert geometry at the cutting edge