CNC axes directions always follow a convention, and all CNC machine manufacturers follow this convention. Here is the convention for HMCs.

What’s the reason for having a fixed convention ? Imagine if you DON’T have a convention ! The drilling motion on machine will be along the Z axis, and on another it will be the X or Y axis. You’ll end up having to first figure out the axes directions for the machine, and then write a CNC program specifically for this machine. Programs will not be interchangeable between machines. You’ll have 10 machines on the shop floor, and each will will have its own CNC axes directions.

So here is the CNC axes directions convention: The spindle is ALWAYS the Z axis. The right hand rule is used to determine the linear axes and their direction. The middle finger is the Z axis, the thumb the X axis, and index finger the Y axis. The fingers point towards the Plus directions.

Rotary axes about X, Y and Z are called A, B and C respectively. Another right hand rule determines these axes. If you point the thumb towards the Plus direction of the linear axis, the other curled fingers are the direction of the rotary axis. In the picture above, the rotary table is the B axis because it is about the Y axis.

Want to reduce waste of machine capacity in your shop floor, improve profits via Industry 4.0 ?
Check out our LEANworx CNC machine monitoring system.
You start seeing big results in just a couple of weeks.

I saw this unusual sight of mangoes being sold from a bullock cart on a Chennai street recently. Unusual because bullock carts are used to transport, not sell from. Also unusual because bullock carts are becoming an increasingly rare sight in Indian cities (sadly for me – I’m a strong votary of non-motorized transport). The owner of this mobile shop said he WAS selling his mangoes from the cart for the novelty value, to set him apart from nearby static shops. Note the ubiquitous Amma poster at the back.

The mangoes being sold were the Imam Pasand variety. The Imam Pasand is a very sweet, large, spherical mango with a very thin skin. Mostly grown in AP. Looks like an orange, and almost violates the term ‘mango-shaped’. The name means ‘the Imam’s favourite’, an Imam being a Muslim religious leader. It’s also called the Himayat.

Nobody seems to know how the name originated – maybe some famous Imam’s (an Imam is a Muslim religious leader) favourite fruit, or the emperor Humayun’s favourite? Humayun was the father of Akbar and great-grandfather of Shah Jehan, who built the Taj Mahal. 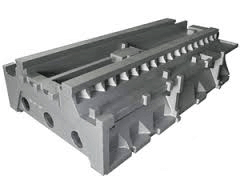 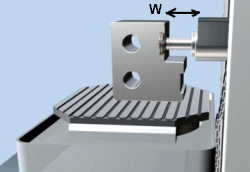 CNC machining center – What is a Quill ?