The heat shrink holder has a cylindrical bore which holds a tool with a cylindrical shank, like a side lock holder. The problem with a side lock holder is that it needs a clearance between the tool shank and the bore, typically 10 microns. When you clamp the tool with the side screw, the tool gets pushed to the opposite side of the bore and is not central, thus causing runout. The moment you have a runout you have imbalance, vibrations, and all the related problems like reduced finish, reduced accuracy and lower tool life.

In a heat shrink holder there is no clearance between the tool shank and the bore, and on the contrary there is an interference – the bore dia. is less than the the tool shank dia. To insert the tool, the bore is heated to about 320 degrees C so that it expands. The tool is then inserted, and when the bore cools down it contracts and holds the tool tight. Since the contraction is uniform around the periphery, there is no runout unlike in a side lock holder. The heating and cooling is done on a special machine that heats and cools in less than a minute. 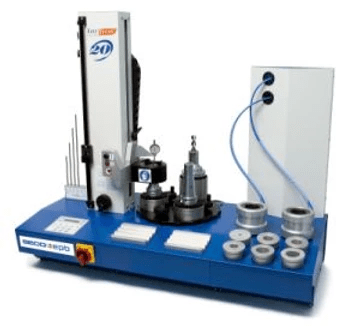 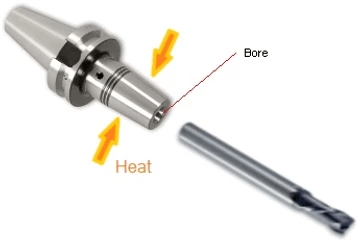 Because there is no runout you get better accuracies, reduced vibration, faster and smoother cutting, improved tool life and better spindle bearing life.

I saw this beauty being lovingly polished one morning on my way to the office. According to the web it’s a Morris Minor 1000. Look at those curves on her ! 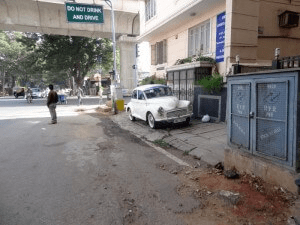 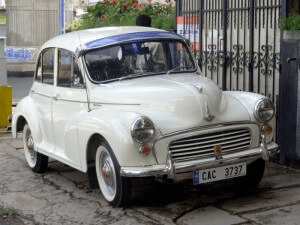 8.5 Lakh Moggies (the British nickname for the Morris Minor – also a British word for a common cat that has no pedigree) were made between 1952 and 1971 in the UK.

They were known for their exceptional design and durability. The initial prototype was known as the Morris Mosquito. Specs. : 948 cc, 27.5 bhp, 14 km. per liter of petrol.

Notice the ‘Do not drink and drive’ sign behind the car ? Lots of them in Bangalore, home of a lot of booze factories, and the only city I’ve come across where you’re allowed to stand at a liquor shop counter and drink. To facilitate the latter, a lot of liquor shops sell spicy fried snacks and salted peanuts.