In a typical machining operation in CNC turning or CNC milling, two-thirds of the heat is generated as a by-product of shearing off the workpiece material. The other one-third is created by the friction of the chip sliding over the cutting tool. High temperature in the tool results in rapid tool wear, and high temperature in the work piece can change its metallurgical characteristics and hardness, create unwanted thermal expansion, or lead to unwanted chemical reactions such as oxidation. This is why the tool and workpiece must be kept cool by using a coolant.

80 % of the heat generated is carried away by chips (see this post), and we use coolant to take away the rest. Coolant also acts as a lubricant, reducing the friction between the tool and workpiece that generates heat. The lubrication also prevents built-up-edge. 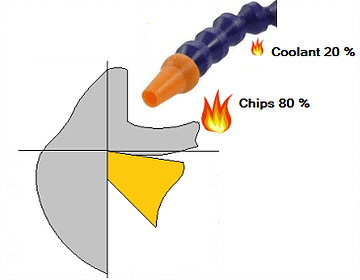 There are various kinds of coolants: oil, oil-water emulsion, aerosols (mists), and air or other gases. They may be made from petroleum, plant oils, water, compressed air and compressed Carbon Dioxide.

The most popular coolant is an emulsion of water and mineral oil. Water is a good conductor of heat but cannot be used directly as a coolant because it boils quickly, promotes rusting of machine parts, and is not a great lubricant. Mineral oil is a great lubricant, but is poor at heat dissipation. When you mix water and mineral oil with other ingredients you get an optimal coolant. This mixture is designed to inhibit rust, tolerate water hardness, resist thermal breakdown, and be environmentally safe.

Biryani and Pulao – what’s the difference ?

The word Biryani is derived from the Persian word ‘Birian’. In Persian, Birian means ‘Fried before Cooking’. Meat (or vegetables) is fried in ghee and half-cooked. Separately, rice is fried in Ghee and half-cooked. The rice and meat are layered in a vessel called a Handi. You can see the layers in the vessel, and the different layers are visible and have a different taste when served.

Biryani – in the Handi and on the plate

Pulao is from the Persian word Pilaf. Rice is browned in oil, and separately, meat (or veg) is fried in Ghee and cooked with aromatic spices in water. The rice and this broth are mixed together and cooked. The pulao is a homogenous mixture when cooking, and looks and tastes homogeous when served.

Pulao – in the vessel and on the plate

The difference between biryani and pulao is in the LAYERS. Biryani has layers, while pulao does not. So Biryani is multi-dimensional and more interesting as you eat it.

I first learnt this about this difference about 10 years ago, in a restaurant in Bangalore called Biryani Merchant (no longer in existence, sadly). They served 3 different types of biryani on any given day (out of the 10-odd types in India). There was a leaflet on each table educating you about biryani. The menu was fixed, and you paid a fixed amount, ate as much as you could. Way back then, as a young lad of 45 I could put away vast quantities of food. Owners of ‘eat-all-you-can’ establishments used to shiver as I walked in, thinking of the damage I was about to do to their balance sheet.

India has a large variety of Biryanis: Lucknow, Hyderabadi, Kashmiri, Ambur, Kolkata, Bohri, Calicut, Tahiri (this is a vegetarian biryani).