CNC: Work hardening, and how it affects CNC machining

Work hardening is the process of a metal becoming stronger and harder by plastic deformation, due to changes in the crystal structure of the material.

When you bend a piece of wire back and forth a few times, it becomes harder to bend at the same point. This becoming ‘harder to bend’ is work hardening. Some metals like low-carbon steel, pure copper and aluminium can only be strengthened this way. They are deliberately work hardened by hammering, rolling or drawing. Jewellery wire of silver and gold is commonly work hardened.

In metal cutting, you can usually identify work hardening on the part visually – the cut surface appears shiny and slippery. A couple of big causes are:

1. Machining with a depth of cut that is too low. The workpiece gets compressed and springs back instead of being cut. Such repeated cuts cause repeated deformation and work hardening.

2. The tool’s cutting edge is not sharp, resulting in some of the material getting compressed instead of being sheared off.

– Use cutting parameters recommended by the tool manufacturer

– In thread turning of stainless steel, ensure that the depth of cut is more than 0.08 mm. This can happen without your knowing, because the canned cycle reduces the depth of cut in each cut to keep the cutting load constant.

I saw a movie on Dashrath Manjhi (1934 – 2007) recently. I’ve only heard of him before, but the movie brought this amazing man to life, although I think it is badly made and does not do justice to the true story.

Dashrath lived in the village of Gehlaur in Bihar’s Gaya district. He used to go into the jungle across the hill to cut firewood, and his wife Phaguni took him lunch and a mud pot of water every day.

She fell on the hill one day and got badly hurt. That’s when Dashrath thought of cutting a road through the hill that would make life easier for him and the other people of the village, like in getting to the nearest hospital. The hospital was in Wazirganj, 10 km. away as the crow flies, but 30 km. by road since the road skirted around the long hill (see picture above). His wife supported him in this, but the village thought he was crazy, taking on an impossible task. He earned his livelihood every day from 8 AM to 1 PM ploughing other people’s fields. From 4 AM to 8 AM and 1 PM till dusk he worked on cutting through the hill, at a location where its height was lowest. This is the story according to Dashrath’s son and people from his village, in a documentary that I saw on the web. The story in the movie is quite different from this, with added masala.

Over the next 22 years he carved out a passage 100 m. long, 7 m. deep (the height of the hill) and 9 m. wide. He did this with a hammer, chisel and crowbar, battling public ridicule, the weather and who knows what else. That cut in the hill has now become a road that has shortened the distance from his village to Wazirganj to 10 km. 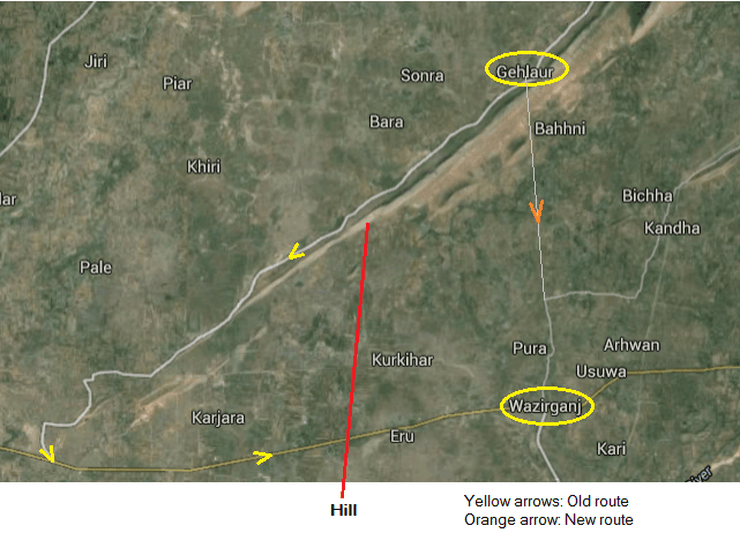 Dashrath, from being ridiculed, became a hero in his village and in the state. The road he started (the stretch with the orange arrows in the picture) is called the Dashrath Manjhi road. He died of cancer in Delhi’s AIIMS in 2007, and was given a state funeral.